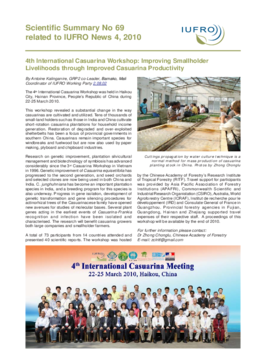 The 4th International Casuarina Workshop held in Haikou City, Hainan Province, People's Republic of China during 22-25 March 2010, revealed a substantial change in the way casuarinas are cultivated and utilized.


The 4th International Casuarina Workshop held in Haikou City, China, discussed, among other things, the changing use and cultivation of casuarianas. Tens of thousands of small land holders such as those in India and China cultivate short-rotation casuarina plantations for household income generation. Restoration of degraded and over-exploited shelterbelts has been a focus of provincial governments in southern China. Casuarinas remain important species for windbreaks and fuelwood but are now also used by paper making, plyboard and chipboard industries.