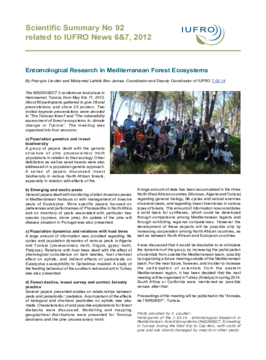 The MEDINSECT 3 conference held in Hammamet, Tunisia, this May addressed topics such as insect biodiversity, exotic pests, population genetics and dynamics, forest decline and insect control.


The conference of IUFRO 7.03.14 "Entomological Research in Mediterranean Forest Ecosystems" held in the Tunisian city of Hammamet from May 8 to 11, 2012 drew some 60 participants. The meeting was organized into four sessions: a) Population genetics and insect biodiversity; Emerging and exotic pests; Population dynamics and relations with host trees; d) Forest decline, insect survey and control, forestry practice. The next meeting will be organized in Antalya, Turkey, in spring 2014. It was also discussed to increase the participation of scientists from outside the Mediterranean basin, possibly by organizing a future meeting outside of the Mediterranean basin.