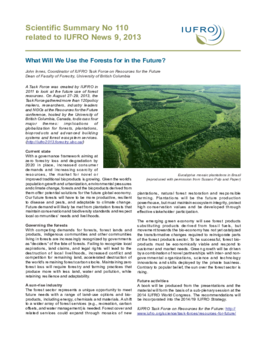 
With a governance framework aiming at zero forestry loss and degradation by 2020 in place, increased consumer demands and increasing scarcity of resources, the market for novel or improved traditional bioproducts is growing. Given the world’s population growth and urbanization, environmental pressures and climate change, forests and the bioproducts derived from them offer potential solutions for the future global economy. Against this background, a Task Force was created by IUFRO in 2011 to look at the future use of forest resources. On August 27-29, 2013, the Task Force gathered more than 120 policy makers, researchers, industry leaders and NGOs at the Resources for the Future conference, hosted by the University of British Columbia, Canada.


What Will We Use the Forests for in the Future?

John Innes, Coordinator of IUFRO Task Force on Resources for the Future
Dean of Faculty of Forestry, University of British Columbia