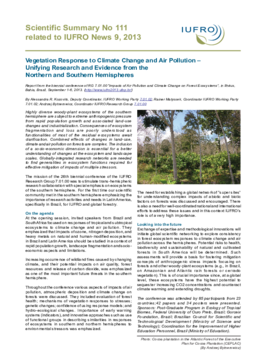 IUFRO conference in Brazil on impacts of air pollution and climate change on forest ecosystems stresses importance of unifying research and evidence from the northern and southern hemispheres.


At the opening session of the 26th biennial conference of IUFRO Research Group 7.01.00 held in Ilhéus, Bahia, Brazil, September 1-6, 2013, invited speakers from Brazil and South Africa focused on responses of tropical and subtropical ecosystems to climate change and air pollution. They emphasized that impacts of ozone, nitrogen deposition, and heavy metals on natural and human-modified ecosystems in the southern hemisphere should be studied in a context of rapid population growth, landscape fragmentation and socio-economic aspects and limitations. In general, a need for well-coordinated national and international efforts to address issues of vegetation response to climate change and air pollution was identified and in this context IUFRO's role is of very high importance.


Unifying Research and Evidence from the Northern and Southern Hemispheres