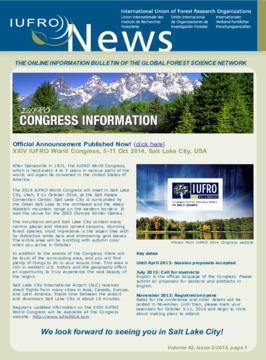 The official announcement of the XXIV IUFRO World Congress in October 2014 in Salt Lake City has just been published – think about making plans to attend! And celebrate the Int'l Day of Forests on 21 March!


This issue links to the "Official Announcement of the XXIV IUFRO World Congress" which contains a lot of information about the 2014 event. You will also find information on the 2nd European Forest Week to be held this December in Rovaniemi, Finland, as well as announcements of new publications and upcoming meetings such as the "World Forests Summit" in Stockholm in early March 2013 and the Third IUFRO Latin American Congress in Costa Rica this June.