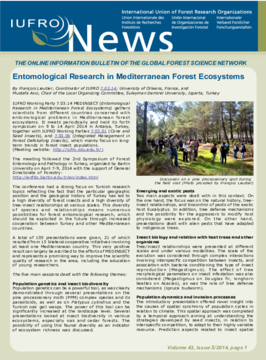 Learn about entomological research in Mediterranean forest ecosystems; forest resources monitoring, the "Florence Declaration on the Links between Biological and Cultural Diversity" and more...

The international Forest Change 2014 conference in Freising, Germany, touched on issues concerning biophysical, natural as well as anthropogenic drivers of forest change, for instance, and resource management systems. Participants concluded, among other things, that uncertainty was still an overarching issue to be addressed in monitoring concepts and models.

Other articles highlight the 1st European Conference for the Implementation of the UNESCO-SCBD Joint Programme on Biological and Cultural Diversity, the Memorandum of Cooperation that IUFRO has signed with the European Geosciences Union, and the successful participation of IFSA students at the Forest Asia Summit in Jakarta. Further meeting reports, upcoming events, information on publications, awards and on the IUFRO World Congress this October round off the issue.