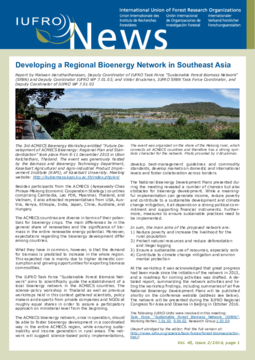 Learn about the development of a regional bioenergy network in Southeast Asia, the design of a global teak support program, and the plans of the new GFEP Rapid Response Assessment on Illegal Timber Trade.

Find out what Jerry Vanclay, Coordinater of the IUFRO Task Force on Foresight for Forest Sector Planning, had to say about "Future Scenarios for the Forest Sector" at the Forest Policy Day of the Austrian Ecosocial Forum.

And meet Janice Burns, the new holder of the IFSA/IUFRO Joint Position, who joined IUFRO Headquarters in early February.

As always, you will find a variety of announcements from positions to publications and upcoming meetings. Safe the dates of the IUFRO Regional Congress for Asia and Oceania in October 2016 and of the IUFRO 125th Anniversary Congress in 2017!