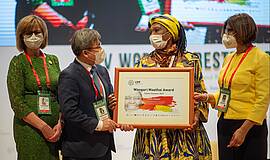 
Ndjebet has tirelessly promoted the concept that women should be involved in forest management and have equal rights to forest land and resources - and that when they do, forests are better preserved and entire communities benefit. Through the African Women’s Network for Community Management of Forests, which she co-founded in 2009, Ndjebet has become a leading voice, both in Cameroon and internationally, in building global recognition on the importance of gender equality in forest management. The organisation now has 20 member countries across Africa.

Presented by the Collaborative Partnership on Forests (CPF), which is chaired by the Food and Agriculture Organization of the United Nations (FAO), the award was conferred at a ceremony during the XV World Forestry Congress in Seoul, Republic of Korea.

The award was presented to Ms. Ndjebet by FAO Deputy Director-General and CPF Chair, Ms. Maria Helena Semedo (right), in the presence of the Austrian Director-General for Forestry and Sustainability and IUFRO’s Host Country Representative, Ms. Maria Patek (left), who served as a member of the selection jury.