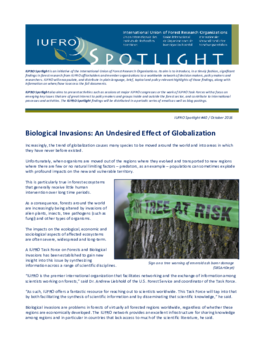 
The trend of globalization causes many species to be moved around the world and into areas in which they have never before existed. The impacts on the ecological, economic and sociological aspects of affected ecosystems are often severe, widespread and long-term. Forests around the world, for example, are increasingly being altered by invasions of alien plants, insects, tree pathogens (such as fungi) and other types of organisms.

The IUFRO Task Force on Forests and Biological Invasions has been established to gain new insight into this issue by synthesizing information across a range of scientific disciplines. The Task Force is expected to provide opportunities to minimize the number of new invasions. In part, it is hoped this will be accomplished through information sharing.

Find out more about the Task Force at: http://www.iufro.org/science/task-forces/biological-invasions/