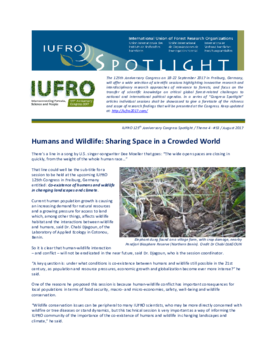 This Congress session looks at the conditions under which co-existence between humans and wildlife is possible in the 21st century as population and resource pressures become more intense.


One of the reasons why Dr. Chabi Djagoun, of the Laboratory of Applied Ecology in Cotonou, Benin proposed this session is because the human-wildlife conflict has important consequences for local populations in terms of food security, macro- and micro-economies, safety, well-being and wildlife conservation.

Climate change, for example, can deeply modify the co-existence of humans and wildlife. In developing countries with a greater dependence on natural resource-based livelihoods, this can impact the socio-economic status of communities, hamper progress towards development goals and present an overall threat to sustainable development.

The session will discuss efforts to reduce human-wildlife conflict (HWC) and ways to harmonize peaceful co-existence between them to preserve biodiversity, including threatened wildlife populations, and to ensure sustainable use of ecosystem services.