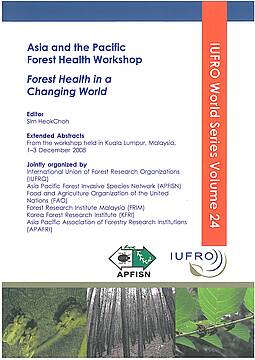 Read about the threats that increased trade and international travel pose to forest health by the introduction of alien species including pests and diseases.


Increased trade and international travel have resulted in significantly increased risks to forest health by the introduction of alien species including pests and diseases, intentionally and non- intentionally. Similarly, growing trends in urban greening and landscape beautification often include imports of exotic plants. This has contributed to rapid increase in the international movement of plant materials including young seedlings. Many previously unreported or unknown pests and diseases, brought in by these movements of planting materials, have surfaced in these countries; further aggravating the threat that has already multiplied by increased trade including, especially, of wood and non-wood forest products. The Asian long-horned beetle, which attacks hardwood trees, for example, is indigenous to China and Korea; but was introduced on wooden packaging material to the United States most probably in the 1980s. This pest is a serious threat to the multi-million dollar hardwood industry in North America. Similarly, Eucalyptus rust, mahogany shoot borer and leaf blight in many of the Asian countries were probably introduced to Asia via exotic planting materials for forest plantations. Other species that have been introduced deliberately have later emerged as serious invasive pests. For example, fishes and frogs introduced for human consumption have out-populated local species, weeds for erosion control have invaded agricultural lands, and even species brought in for biological control have spread out of control.

Alongside these issues, there has emerged a growing awareness of the importance of healthy forests in providing various environmental services. Policies and strategies to strengthen the capability and sustain the capacity of the forests in providing these services are increasingly being debated as important parts of forest management in many countries, and also at many international and regional fora.

All of these concerns are captured in the scope of forest health which encompasses factors such as the forest’s age, structure, composition, functions, vigour, and presence of unusual levels of insects or disease, as well as resilience to disturbances. The perception and interpretation of forest health are influenced by individual and cultural viewpoints, land management objectives, spatial and temporal scales, the relative health of the stands that comprise the forest, and the appearance of the forest at a particular point in time.