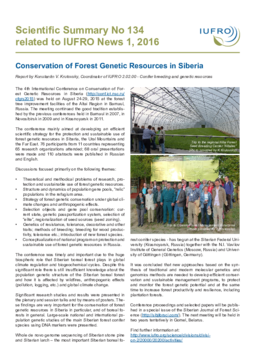 Siberian boreal forests play a major role in global climate regulation and biogeochemical cycles. However, knowledge about the population genetic structure of these forests is still insufficient.

The 4th International Conference on "Conservation of Forest Genetic Resources in Siberia" held in Barnaul, Russia, mainly aimed at developing an efficient scientific strategy for the protection and sustainable use of forest genetic resources in Siberia, the Ural Mountains and the Far East. 76 participants from 11 countries representing 65 research organizations attended the meeting.

The conference was timely and important due to the huge biospheric role that Siberian boreal forests play in global climate regulation and biogeochemical cycles. Despite this significant role there is still insufficient knowledge about the population genetic structure of the Siberian boreal forest and how it is affected by wildfires, anthropogenic effects (pollution, logging, etc.) and global climate change.

Participants concluded that new approaches based on the synthesis of traditional and modern molecular genetics and genomics methods were needed to develop efficient conservation and sustainable management programs, to protect and monitor the forest genetic potential and at the same time increase forest productivity and resilience, including plantation forests.