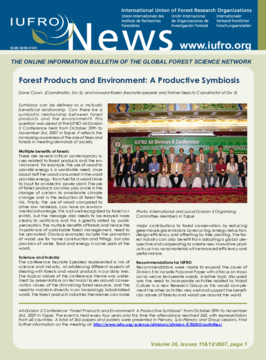 This double issue includes a report on forest products and the environment from the All Division 5 Conference in Taipei and a call for themes for the next IUFRO World Congress.


IUFRO News Vol. 36, double issue 11&12, 2007 published in December, reports on the All Division 5 Conference in Taipei under the theme: "Forest Products and the Environment: A Productive Symbiosis". It also includes a short report on the role of IUFRO at the 5th MCPFE conference in Warsaw, and an announcement of the international conference on Adaptation of Forests and Forest Management to Changing Climate to be held in Sweden in August 2008. In addition to information about past and future meetings, publications, the amended MoU with KFRI, and the DSA awarded to Jack Sutherland, the newsletter publishes a call for themes for the next IUFRO World Congress to be held from 22-28 August 2010 in Seoul, Korea.