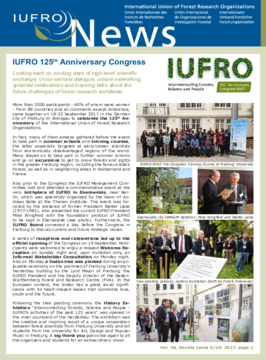 This issue looks back on the successful 125th IUFRO Anniversary Congress, highlights interviews with Congress participants, presents reports from IUFRO meetings about forest pathogens and forest regeneration, and more…


More than 2000 participants - 40% of whom were women - from 89 countries for all around the world came together on 18-22 September 2017 in the German city of Freiburg im Breisgau to celebrate the 125th Anniversary of the International Union of Forest Research Organizations.

"This Congress provided us with a glimpse of the future - new technologies, new innovations that are on the horizon," said Division 3 Coordinator Woodam Chung, Oregon State University, USA, in his interview. Read interviews with Coordinators of Divisions 3, 4, 6, 7 and 9 and watch video talks with Congress organizers and participants who share their views about the importance of the Congress, the future of research in their particular fields, and the role of IUFRO.

Did you know that IUFRO launched a new slogan at the Anniversary Congress that will now become an integral part of the IUFRO logo? Find out how and why IUFRO is “Interconnecting Forests, Science and People” by watching this short film: https://youtu.be/mBYEyzuJmsQ