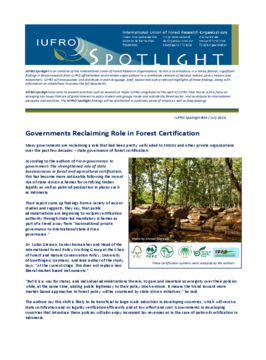 Report: From governance to government: The strengthened role of state bureaucracies in forest and agricultural certification


Many governments are reclaiming a role that had been pretty well ceded to ENGOs and other private organizations over the past few decades – state governance of forest certification.

According to the authors of the report "From governance to government: The strengthened role of state bureaucracies in forest and agricultural certification", this has become more noticeable following the recent rise of state-driven schemes for certifying timber legality as well as palm oil production in places such as Indonesia.

Lead author Dr. Lukas Giessen, Senior Researcher and Head of the International Forest Policy Working Group at the Chair of Forest and Nature Conservation Policy, University of Goettingen, Germany, says the report provides counter-balance to existing research on private actor/institution certification, which has shown a bias toward overestimating private influence. It also shows the significant role ministries and other state forest administrators can and do play in certification politics worldwide.