Building up the Bio-Economy: The Forest Sector Has to Take the Lead 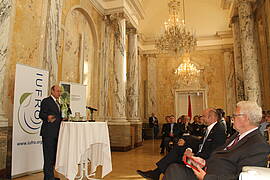 Scientists underline crucial role of forests and trees as a renewable resource for multiple bio-products and the need for cross-sectoral cooperation at an IUFRO Symposium in Vienna.

Vienna (16 April 2015) – The concept of a "bio-economy" as a more innovative, resource-efficient and sustainable economy in a post-petroleum society is high on the political agenda. Countries such as Finland, Germany, the USA and Malaysia as well as the European Union have already developed strategies for a future bio-economy; others are expected to follow. The concept reveals big chances, and it is time for the forest sector to "leave the comfort zone" and take a lead in steering the process in close cooperation with other sectors.

That was the general tenor of experts who met at the IUFRO Bio-economy Symposium entitled "Sowing Innovation – Reaping Sustainability: Forests' Crucial Role in a Green Economy" from 13 to 14 April in Vienna. The meeting was organised by the International Union of Forest Research Organizations (IUFRO), the world's largest network of forest scientists, in cooperation with the Austrian Ministry of Agriculture, Forestry, Environment and Water Management (BMLFUW). The symposium also formed part of the Austrian Forest Dialogue (Walddialog) Almost 100 participants from more than 20 countries attended the event.

"Forests as a renewable resource have the potential to play an increasing role in the sustainability of the global economy as well as in regional and local economies, and a key role in the emerging bio-based economy", said IUFRO President Mike Wingfield in his welcome address: "The main challenge will be how to maximize the forests' contributions while ensuring their sustainability."

Also Gerhard Mannsberger, Director General of the Forestry Department of the Austrian Ministry of Forests and member of the IUFRO Board, underlined the crucial role of the forest-based sector in his opening speech: "About six out of twelve bio-economic sectors, including sectors such as agriculture, fisheries, transportation, and bio-chemistry, depend primarily on the main product of forest management: timber". Therefore forestry should not miss the chance and "become the steering wheel" in the development of a bio-economy.

Scarce resources and destructive developments as boosts
There are various global trends that trigger efforts to set up a bio-based economy. "The world's demand for resources is rapidly increasing. Yet, resources are getting scarce", noted Xaver Edelmann, Founder and President of the World Resources Forum. For example, the worlds' demand for biomass is expected to increase from 1980 until 2020 by 68 per cent and the demand for fossil energy carriers such as oil by 81 per cent.

A future bio-based economy would largely replace non-renewable and fossil-based materials by renewable materials such as provided by forests and trees. However also destructive processes within the forest sector, for example a declining demand for communication paper and a stagnating demand for a number of other forest products, "is really the push for a renewal of the forest sector", said Lauri Hetemäki, Assistant Director (Policy Support) at the European Forest Institute and Professor at the University of Eastern Finland. "At the same time, the forest industry and other industries are changing strategies and business models, investing in new forest-based products. In the past 100 years, paper and wood products have dominated the sector. The future will be about diversity: about many different products."

"The bio-economy needs investments and it represents one of the fastest growing investment opportunities available", said John Innes, Dean of the Faculty of Forestry, University of British Columbia (Canada), and IUFRO Board member. For example, the global market potential for bio-energy, bio-chemicals and fibre composites from forest biomass is estimated to be 505 billion US Dollars in 2015 – and 1,309 billion US Dollars in 2030. However, Innes also referred to risks of investments, e.g. the availability of biomass resource and currency risks.

Diverging definitions and conflicting policies need to be overcome
The concept of a bio-economy refers either to the use of biomass resources or to the use of bio-technologies in order to get high-value, sustainable and competitive products. However, "there is a lack of clarity and definitions of the bio-economy differ, depending on who is using the term", said Daniela Kleinschmit, Professor at the University of Freiburg (Germany) and Coordinator of IUFRO's Division on Forest Policy and Economics.

Considering the fact that the bio-economy is not limited to one sector, "there is a challenge to overcome borders of conflicting policies and to find a solution how to make most efficient use of land". Kleinschmit also pointed out the importance to include – besides the private sector and policy-makers – societal actors in shaping the future bio-economy. "The role of science in steering the process and as a source for expertise is widely acknowledged, but there is a need to not neglect research on ecological risks or social demands."

The concept of bio-economy may be one of the industrialized countries. However some experts pointed out that also countries such as China and Brazil already undertake great efforts to move towards a bio-economy. "It is very likely that technology is transferred southwards. However, there is already also an incredible amount of technology transfer taking place northwards", said John Innes.

All experts agreed on the need to mutually learn from each other and for the forest sector to start engaging with other sectors in order to improve a common understanding of expectations and needs and to prepare for coordinating different policies. Last but not least, the experts also underlined the need to raise communication efforts in order to increase the understanding about the concept of bio-economy within the forest sector – because the question "What is a bio-economy?" is still widespread in the forest community.

The symposium aimed at a review of the state of global discussions and knowledge regarding the role of forests in the bio-economy. The outcomes of the seminar will contribute to the implementation of the IUFRO Strategy 2015-2019. The bio-economy topic is covered by this Strategy and is one of five central research themes of IUFRO.

The International Union of Forest Research Organizations (IUFRO) is the only worldwide organization devoted to forest research and related sciences. Its members are research institutions, universities, and individual scientists as well as decision-making authorities and other stakeholders with a focus on forests and trees. (www.iufro.org)