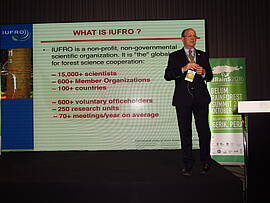 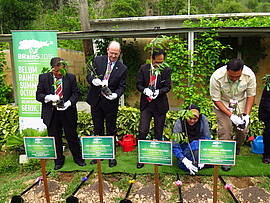 
The Pulau Banding Foundation focuses their activity on conserving the Belum Temengor Rain Forest - a 130 million year old forest of about 300 000 hectares in Northern Malaysia. In its efforts to promote the conservation and sustainability of this important global resource, the Foundation arranged and sponsored the first Belum Rain Forest Summit (BRainS 2016) from the 17th to the 22nd October.

IUFRO participated in the Summit that was attended by many important Forestry Stakeholders including members of the EMKAY Group that fund the Palau Banding Foundation.  IUFRO President Professor Mike Wingfield and IUFRO Deputy  Executive Director Dr. Michael Kleine who is also the Coordinator of the IUFRO Special Programme for Development of Capacities (IUFRO-SPDC), participated in the meeting.  Mike Wingfield presented a keynote lecture during the opening ceremony of the meeting entitled "Building Sustainable Forest Ecosystems through collaboration and Networking: The role of IUFRO" and participated in a tree planting ceremony where a tree was planted on behalf of IUFRO.

This was the first BRainS gathering and the Pulau Banding Foundation plans similar events in the future in order to promote rain forest conservation.