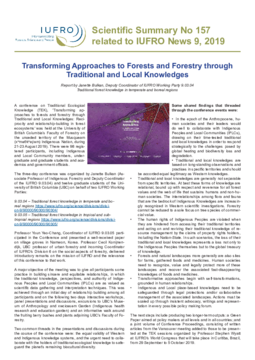 Two main focus areas of this conference were the equal validity of Western and Indigenous knowledge systems, and the urgent need to collaborate with the holders of traditional ecological knowledge to safeguard the planet's remaining biocultural diversity.


Transforming Approaches to Forests and Forestry through Traditional and Local Knowledges

A conference on Traditional Ecological Knowledge (TEK), 'Transforming approaches to forests and forestry through Traditional and Local Knowledges: Reciprocity and relationship-building in forest ecosystems' was held at the University of British Columbia's Faculty of Forestry on the unceded territory of the Musqueam (xwməθkwəýəm) Indigenous Nation, during 21-23 August 2019).

A major objective of the meeting was to give all participants some practice in building sincere and equitable relationships, in which the traditional knowledge, perspectives, and authority of Indigenous Peoples and Local Communities (IPLCs) are as valued as scientific data gathering and interpretation techniques.

The next steps include producing two longer-term outputs: a Green Paper aimed at policy makers at all levels and in all countries; and a joint volume of Conference Proceedings, consisting of written articles from the Vancouver meeting added to those to be presented at the TEK sessions organized by Professor Stephen Wyatt at IUFRO's World Congress in Curitiba.