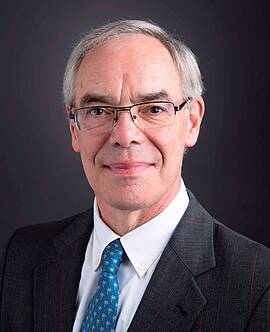 (Curitiba, 5 October 2019) As of today, the International Union of Forest Research Organizations (IUFRO) has a new President.


Dr. John Parrotta, National Research Program Leader for International Science Issues with the U.S. Forest Service, has assumed office for the term until the 2024 IUFRO World Congress in Stockholm, Sweden. He is joined in this leadership role with the new Vice-Presidents Prof. Daniela Kleinschmit, Freiburg University, Germany, and Prof. Shirong Liu, Chinese Academy of Forestry.

Dr. Parrotta follows Prof. Mike Wingfield, FABI Professor and Advisor to the Executive of the University of Pretoria, South Africa, who served IUFRO as President for the past five years, and under whose Presidency the organization celebrated its amazing 125th anniversary. During his term Prof. Wingfield has strongly promoted the great responsibility of IUFRO to provide solid and reliable data that will underpin some of the most important decisions relating to forests and natural resources for a sustainable future. He has also placed special emphasis on strengthening the involvement of young forest scientists through close cooperation with the International Forestry Students' Association (IFSA), which has  now also been provided with full representation on the IUFRO Board.

At the closing ceremony of the 25th IUFRO World Congress in Curitiba, Brazil, incoming President Dr. Parrotta made an enthusiastic acceptance speech, in which he particularly stressed the important role that the forest science community has to play in the world. "The world needs what IUFRO has to offer," he said. "However, the sustainable development challenges we face are multi-faceted, and extend beyond the traditional and even current scope of forest science. The good news is that we are not alone. IUFRO can multiply its impact by expanding our collaboration in research, science synthesis and communications well beyond the boundaries of our current network."

During his five year term Dr Parrotta wishes to especially focus on fostering collaboration with scientists and research networks with whom IUFRO is not sufficiently engaged. This may include, for example, fields such as agriculture, human health, spatial planning, environmental engineering, environmental education, the arts and humanities. "Diversity is IUFRO's strength," he said, "The productivity, health, and the many benefits we derive from forests are underpinned by biodiversity. Similarly, IUFRO's scientific excellence and value to society depend on engaging the diversity of disciplinary perspectives, knowledge, experience, and cultural values among our scientsts and member organizations."

Dr. Parrotta has engaged in various areas of forest science research worldwide for over 30 years, and has a particular interest in tropical forest ecology, the ecology and management of planted forests, forest restoration, and traditional forest knowledge. He has conducted research in Puerto Rico and Brazil, worked collaboratively with many colleagues from around the world on a variety of science syntheses and other projects. He is the author of over 175 scientific publications on these and other topics, and a member of the editorial board of several international forest science journals. He has been active in IUFRO since 1993 and has served as Vice-President for Task Forces, Special Programmes, Projects and IUFRO-led Initiatives for the last five years.