Outstanding Science and Services in IUFRO: Three Awards of the International Union of Forest Research Organizations: 1953–2020 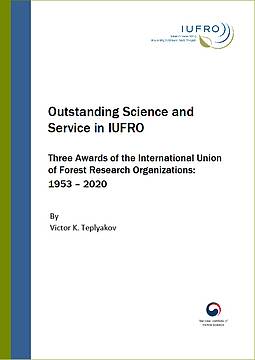 
Since its establishment in 1892, 130 years ago, IUFRO has provided a "home" for forest scientists from around the world to share the results of their work, develop collaborative activities, and advance all fields of forest science and their application for the benefit of forests and people. IUFRO's success over the years has depended on the commitment, hard work and creativity of countless officeholders and the support of our member organizations.

Over the past many decades, IUFRO has recognized the extra efforts of individuals who contribute to strengthening our global network for forest science collaboration. Among the various forms of public recognition offered by IUFRO, two special awards stand out, given to individuals who have made major contributions to IUFRO's work. These are the Honorary Membership and the Distinguished Service Award (DSA). The Honorary Membership award, created in 1953, is IUFRO's highest award and acknowledges persons who have rendered particularly important and outstanding services to IUFRO. The DSA, created in 1981, recognizes those whose work has substantially contributed to furthering the scientific, technical, and organizational aims of IUFRO. In addition, during each IUFRO World Congress since 1971, the prestigious Scientific Achievement Award has been given to several individuals across forest science disciplines in recognition of outstanding research that advances regional or world forestry or forest research.

This book presents short biographical stories of forest scientists granted with the Honorary Membership (since 1953), Scientific Achievement Award (SAA, since 1971), and Distinguished Service Award (DSA, since 1981) of the International Union of Forest(ry) Research Organizations (IUFRO).