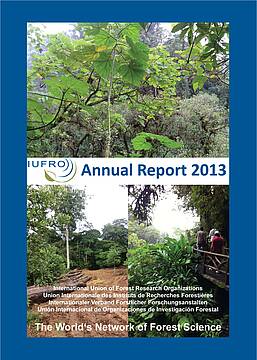 2013 was a remarkable year for IUFRO. Read all about activities and achievements of IUFRO Divisions, Task Forces, Programmes, Projects and Initiatives, and our work at the science/policy interface.


The year 2013, in addition to the busy preparations for the IUFRO 2014 World Congress, was marked by a series of highly successful events, important decisions on the organizational level and strengthened collaboration with international partners.

One of the highlights of the year was certainly the 3rd IUFRO Latin American Congress in San José, Costa Rica, focused on the theme of "Forests, Competitiveness and Sustainable Landscapes".

And, with regard to international partnerships, we are proud to announce that a new joint IUFRO/IFSA (International Forest Students' Association) position was created and hosted at IUFRO Headquarters at its new address in central Vienna, Austria.

Find out more about what IUFRO researchers achieved throughout the past year and how IUFRO as the world's network of forest science succeeded to further increase its visibility in the science/policy arena.