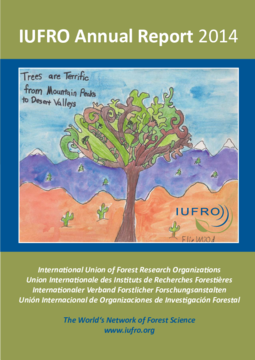 The 24th IUFRO World Congress was truly the highlight of the year. The event under the theme "Sustaining Forests, Sustaining People: the Role of Research", brought together some 3500 participants from more than 100 countries in Salt Lake City, USA.


At the Congress, the International Council (IC) decided on a number of matters of major significance for IUFRO. It elected a new President and Vice-Presidents and other voting members of the Board. It also voted on the host of the next IUFRO World Congress in 2019. Furthermore, IUFRO adopted a new Strategy 2015-2019 with the theme "Interconnecting Forests, Science and People".

In 2014, IUFRO continued to strengthen and expand its collaboration with other organizations such as the International Forestry Students’ Association (IFSA), and provided input to the deliberations about future Sustainable Development Goals (SDGs).

The 2014 Annual Report gives you an extensive overview of the activities of IUFRO Divisions, Task Forces, Special Programmes, Projects and Initiatives throughout the year and includes an outlook on 2015 and beyond by the new IUFRO President Mike Wingfield from South Africa.