The Scientific Achievements Award of the International Union of Forest Research Organizations: 1971 – 2019 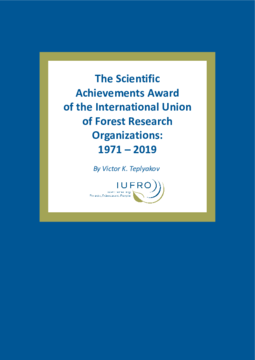 This booklet presents short biographical stories of forest scientists granted the Scientific Achievement Award (SAA) of the International Union of Forest Research Organizations (IUFRO) from the beginning of the establishment of this IUFRO Award in 1971.


Over almost 50 years (1971–2019), some 97 scientists representing 31 countries from all continents have been granted with IUFRO Scientific Achievement Awards for their research on a wide spectrum of theoretical and practical issues.

The research areas covered by IUFRO SAA recipients go far beyond the forest issues represented by the 9 IUFRO Divisions and numerous acting and former Task Forces, project and interdisciplinary groups. Many awardees are widely recognized scientists, researchers, teachers, and administrators. Many have served in Universities’ Presidential and Rector Offices, or as the Deans of colleges, or as Councilors and advisors of academic, governmental and business structures. Almost all are members of editorial boards and reviewers of scientific journals that publish peer-reviewed papers.

Much of the research conducted by IUFRO awardees can be considered as breakthrough science, and their results have created the basis for many useful pioneering applications in forest practice.

<- Back to: General Publications