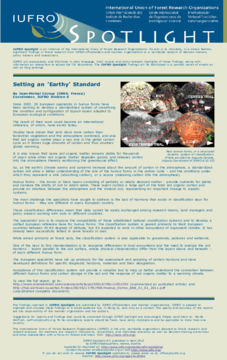 Specialists in humus forms have been working to develop a standardized system of classifying the condition and configuration of topsoil layers adapted to European ecological conditions.


A standardized classification system for the condition and configuration of topsoil layers has been developed by a group of European scientists and will provide a valuable tool to help us better understand the connection between different humus forms and carbon storage in the soil and the response of soil organic matter to a warming climate. The classification system is geared primarily to West European countries between 40-60 degrees of latitude, but it’s expected to work in other ecosystems of equivalent climate. It has already been successfully tested in some forests in Iran. While aimed primarily at forest soils, the classification system is also applicable to grasslands, pastures and wetlands.