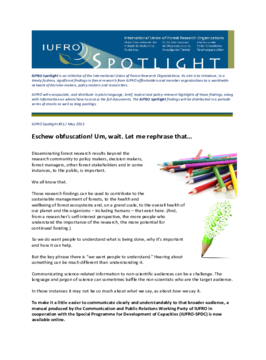 
Cynthia Miner of the U.S. Forest Service and Coordinator of IUFRO's Working Party on Communication and Public Relations, who headed up the editorial team that put the manual together, says it was written "to help scientists and professional communicators in their communication efforts with people outside the scientific community."

The manual will also serve as source for training workshops on science communication offered by IUFRO-SPDC for forest scientists in developing countries in Africa, Asia and Latin America and can be found at: http://www.iufro.org/science/special/spdc/training-resource-centre/

View all IUFRO Spotlights at http://www.iufro.org/media/iufro-spotlights/