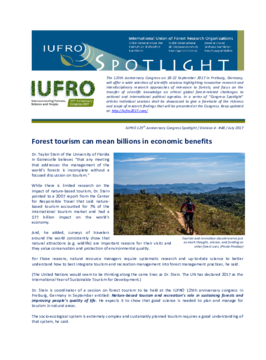 This Anniversary Congress Spotlight highlights a session that will show how good science is needed to plan and manage for tourism in natural areas.


Dr. Taylor Stein of the University of Florida in Gainesville is coordinator of this session to be held at the IUFRO 125th anniversary congress in Freiburg, Germany in September entitled: Nature-based tourism and recreation’s role in sustaining forests and improving people's quality of life.

"As more forest professionals see tourism and recreation presented at scientific meetings, they will learn that this use of the forest should not be considered a low priority of forest management, but tourism and recreation should receive just as much thought, science, and funding as other forest uses," he says.