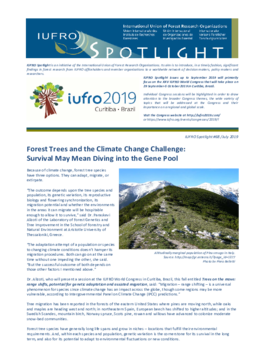 Because of climate change, forest tree species have three options. They can adapt, migrate, or extirpate. Within each species and population, genetic variation is the cornerstone for its survival, and also for its potential to adapt to new conditions.

The session aims to focus on the significance of marginal populations and their potential genetic differentiation, as a result of their growth in marginal niches and of their potential isolation from other populations of the same species. It will examine their unique gene pools, and the risks they face due to climate change, and explore the progress and promise of forest genetics research for assessing genetic variations in marginal populations, their gene pool changes over time and their extirpation possibility.