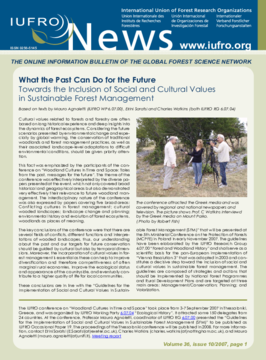 This issue focuses on social and cultural values in forest management as well as on measures to protect Norway spruce in Europe, and reports on the MoU between IUFRO and ITTO.


IUFRO News Vol. 36, issue 10, 2007 published in October, describes measures for the inclusion of social and cultural values in forest management. It also reports on actions needed for the protection of Norway spruce involving the conservation of forest genetic resources. A third report deals with natural enemies and other multi-scale influences on forest insects. In additon, the issue reports on the Memorandum of Understanding between IUFRO and ITTO and lists announcements of publications, training courses, master's programs, and meetings.