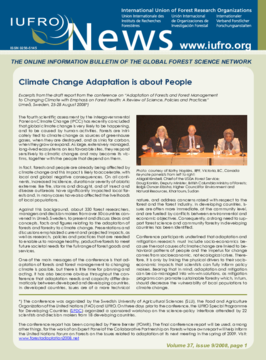 The call for session proposals for the 2010 IUFRO World Congress, and a report on adaptation of forests and forest management to changing climate, are the highlights of IUFRO News, issue 9, 2008.


IUFRO News Issue 9, 2008, publishes excerpts from the draft report from the conference on "Adaptation of Forests and Forest Management to Changing Climate with Emphasis on Forest Health: A Review of Science, Policies and Practices" held in Umeå, Sweden, 25-28 August 2008. The newsletter also announces that the IUFRO Congress Scientific Committee (CSC) is now accepting session proposals for the 2010 IUFRO World Congress, 23-28 August, Seoul, Korea. In addition, IUFRO repeats its invitation to fill in the questionnaire on the services and benefits of IUFRO at http://www.iufro.org/questionnaire by 10 October 2008.