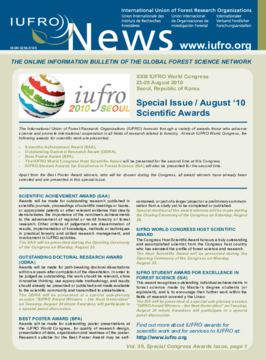 In a special issue of IUFRO News the names of the recipients of IUFRO's prestigious scientific awards to be presented during the IUFRO 2010 Congress are released.


The International Union of Forest Research Organizations (IUFRO) honors through a variety of awards those who advance science and promote international cooperation in all fields of research related to forestry. At each IUFRO World Congress, the following awards for scientific work are presented:

Apart from the Best Poster Award winners, who will be chosen during the Congress, all award winners have already been selected and are presented in this special issue.