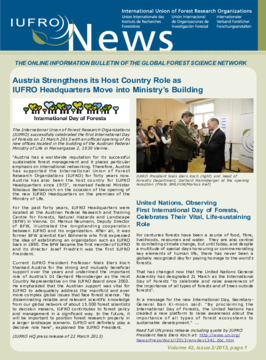 The UN General Assembly has designated 21 March as the International Day of Forests. IUFRO celebrated the 1st IDF with the opening of its new offices in the building of the Austrian Ministry of Life.


This issue illustrates how Austria has again strengthened its IUFRO host country role as IUFRO Headquarters are now located in building of the Austrian Ministry of Life. An official opening reception took place on 21 March 2013 and was a great success. 21 March has been officially designated and recognized as the International Day of Forests by the United Nations General Assembly and 2013 is the first year of recognition. Also read about World Wood Day which celebrated on the same day as the International Day of Forests to raise the awareness on how wood plays a key role for a sustainable future. Announcements of recent publications, upcoming meetings and more, round off the newsletter in the usual manner.