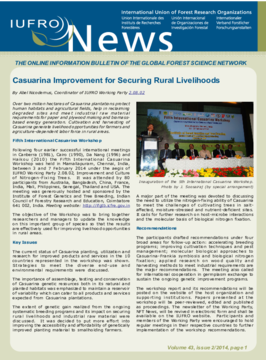 Read about topics such as Casuarina improvement for securing rural livelihoods, the role and efficiency of REDD+, the importance of science communication and, the IUFRO-IFSA relationship.

The Fifth International Casuarina Workshop was held in Mamallapuram, Chennai, India, with the objective to bring together researchers and managers to update the knowledge on this important group of species so that the results are effectively used for improving livelihood opportunities in rural areas.

The International Conference on Adopting REDD+ for Conservation, Sustainable Community Livelihood and Climate Change Mitigation held in Hong Kong, highlighted, among other things, the importance of understanding the effects of climate change itself as well as other factors driving forest and biodiversity loss and degradation, and how these changes are affecting the livelihoods and development prospects for forest-dependent communities.

Recognizing the need for enhancing science-society interactions, the Royal Government of Bhutan has agreed to include science communication and science/policy interfacing work in its newly established Climate Change Adaptation program. The Special Programme for Development of Capacities (SPDC) of IUFRO contributes to this program with two training workshops on science-policy interfacing and science communication.