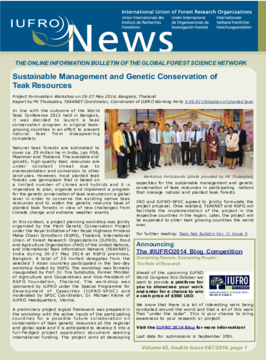 Read reports about such diverse topics as genetic conservation of teak resources, management of landscape change, ozone and plants, green cities, or linking gender and adaptation to climate change.


This issue of IUFRO News highlights a series of important scientific IUFRO meetings as well as IFSA activities at international forums. Among them, there are, for example: the Ozone and Plants conference held on 18-21 May 2014 in Beijing, China; the European Forum on Urban Forests 2014 on Green Cities – Urban Nature "Crossing Boundaries" in Lausanne, Switzerland, from 3-7 June; and the IV International Scientific and Practical Conference "Innovation and Technology in Forestry" (ITF-2014) on 27-28 of May, 2014, at the Saint-Petersburg Forestry Research Institute, Russia.

You will also learn about the #IUFRO2014 Congress blog competition or the Wangari Maathai award of the Collaborative Partnership on Forests, which will be presented during the IUFRO World Congress this October. As always, you will find a series of interesting announcements of positions, new publications and upcoming meetings.