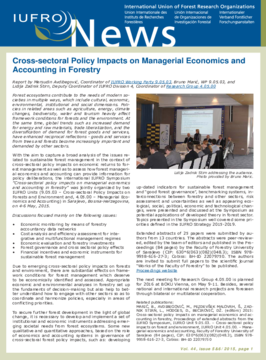 Learn about the major results of the first IUFRO Board meeting in the term 2015-2019, read about IUFRO's activities at UNFF11 and find out about IUFRO-related events at the World Forestry Congress.


The 54th Meeting of the IUFRO Enlarged Board took place on 15 and 16 April 2015 in Vienna, Austria. The new Strategy for 2015-2019 was at the centre of discussions. A series of new Task Forces was approved and more are on their way. Also, the dates for the next major IUFRO events, the IUFRO Regional Congress for Asia and Oceania 2016 and the IUFRO 125th Anniversary Celebration 2017 were officially confirmed.

Among the highlights for IUFRO at the United Nations Forum on Forests held at UN Headquarters in New York from 4 to 15 May 2015 were the official launch of the new GFEP Assessment Report on Forests and Food Security, a joint statement by CIFOR, IUFRO and ICRAF to the UNFF, and a side event by IUFRO-WFSE.

This newsletter also contains reports from the IUFRO meeting on  "Cross-sectoral Policy Impacts on Managerial Economics and Accounting in Forestry " held in in Sarajevo, Bosnia-Herzegovina, on 4-6 May, 2015, from the conference on  "Forestry: Bridge to the Future " that took place on 6-9 May 2015 in Sofia, Bulgaria, and from the World Wood Day celebrated in Turkey on 21 March.

The Calendar of Meetings this time includes a section on IUFRO-related events at the World Forestry Congress in Durban on 7-11 September 2015.


To read the full text please choose among the PDF and Word options: