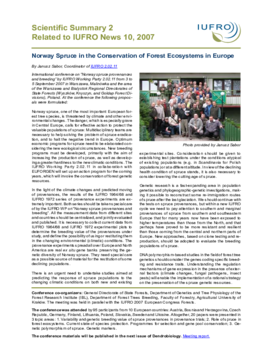 The conference on "Norway spruce provenances and breeding" in September 2007 in Poland addressed the threats of climate change and other environmental changes to Norway spruce.


Norway spruce, one of the most important European forest tree species, is threatened by climate and other environmental changes. The danger, which is especially grave in Central Europe, calls for effective action to protect the valuable populations of spruce. In the light of the climate changes and predicted moving of provenances, the results of the IUFRO 1964/68 and IUFRO 1972 series of provenance experiments are considered extremely important.

At the conference on “Norway spruce provenances and breeding