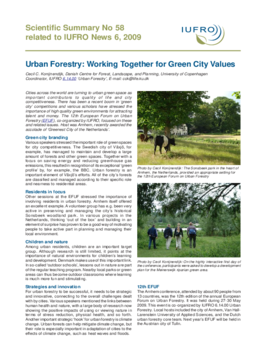 Cities across the world are turning to urban green space as important contributors to quality of life and city competitiveness. Urban forestry is a crucial element in these efforts.


The 12th European Forum on Urban Forestry (EFUF), co-organized by IUFRO, in Arnhmen, the Netherlands focused on the important role of urban forestry for increasing the quality of life as well as the competitiveness of cities. In green space development, residents should take an active part in planning and managing their local environment. Children are considered a major target group given the importance of natural environments for children's learning and development. In addition, urban forestry can also contribute to climate change mitigation and to the adaptation of cities to the effects of climate change, such as heat waves and floods.