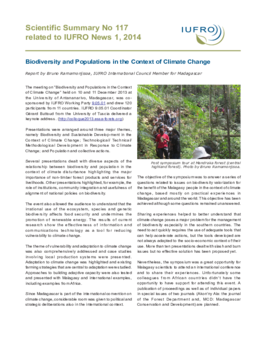 Diverse aspects of the relationship between biodiversity and population in the context of climate disturbance were discussed at a meeting in December at the University of Antananarivo, Madagascar.


The meeting on "Biodiversity and Populations in the Context of Climate Change" held on 10 and 11 December 2013 at the University of Antananarivo, Madagascar, was co-sponsored by IUFRO Working Party 9.05.01

The objective of the symposium was to answer a series of questions related to issues on biodiversity valorization for the benefit of the Malagasy people in the context of climate change, based mostly on practical experiences in Madagascar and around the world. This objective has been achieved although some questions remained unanswered.

Biodiversity and Populations in the Context of Climate Change