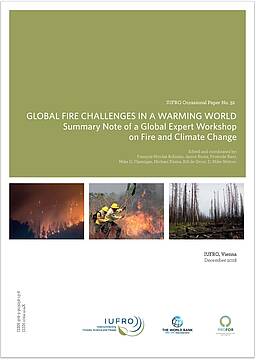 
Today, catastrophic wildfires are increasingly common across the globe. Recent disasters have attracted media attention and strengthened the perception of wildfires as "bad" events, a plague worsened by climate change that has yet to be eradicated. Although it is true that fire has a destructive potential, the reality of global fire activity depicts a much more complex picture in which fire can be a useful, if not necessary, tool for food security and the preservation of cultural landscapes, as well as a an integral element of many ecosystems and their biodiversity.

In view of this, the International Union of Forest Research Organizations (IUFRO) and the World Bank's Program on Forests (PROFOR) jointly convened a Global Expert Workshop on Fire and Climate Change with the aim of improving the understanding of the complex interrelations between wildfire, climate, and land management, and of identifying urgently required response strategies and actions.

This Occasional Paper is the result of a large collaborative effort by fire scientists and practitioners who believe that learning to co-exist with changing fire activity is not only possible but necessary if we, as a global society, are to adapt to climate change and keep our natural and cultural landscapes healthy, resilient, and safe for the next generations. The work presented hereafter was developed during, and as follow-up to, the Global Expert Workshop on Fire and Climate Change hosted in Vienna, Austria, in July 2018. It stresses the diversity and the complexity of the global fire situation, a situation that is evolving, positively or negatively, in unknown proportions due to global environmental changes — with climate change being the most acknowledged manifestation.

In addition, a policy note was published by PROFOR which aims to lay out the key policy messages and recommendations for mitigating and adapting to the increasing impacts of wildfires around the world under a changing climate.
https://www.profor.info/content/managing-wildfires-changing-climate