Spotlight #79 - A Focus on Gender Equality in Forestry 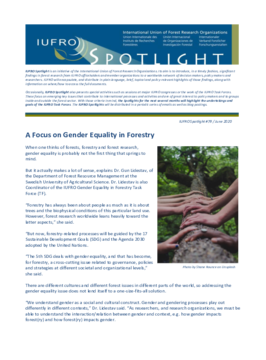 When one thinks of forests, forestry and forest research, gender equality is probably not the first thing that springs to mind. But it actually makes a lot of sense. Read on to find out why…


"Forestry has always been about people as much as it is about trees and the biophysical conditions of this particular land use. However, forest research worldwide leans heavily toward the latter aspects," explains Dr. Gun Lidestav, of the Department of Forest Resource Management at the Swedish University of Agricultural Science. Dr. Lidestav is also Coordinator of the IUFRO Gender Equality in Forestry Task Force (TF).

Integrating gender as a cross-cutting issue in the implementation of the IUFRO Strategy as well as strengthening the participation of scientists on equal terms, are the main objectives of the TF. This work will then provide a basis for gender mainstreaming processes within the IUFRO network, and hopefully beyond – i.e. advancing gender equality in forestry worldwide.

The approach that her TF will take is to explain and promote gender equality as it relates to the scientific and research practices of IUFRO. And, by examining selected gender equality initiatives in different parts of the world, it will provide examples of research and policy interaction.