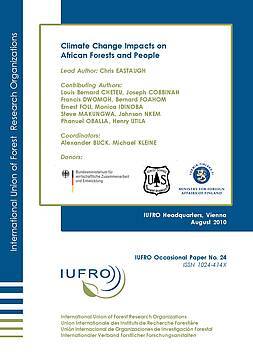 IUFRO's Occasional Paper 24 looks at the effects that climate change will have on forest-dependent people in Africa. The report was presented at the XXIII IUFRO World Congress.


Forests cover nearly one-third of the earth's surface and hold the majority of its terrestrial species. They also account for almost half the terrestrial carbon pool and thus play a significant role in regulating the earth's climate. Changes in climate alter the configuration of forest ecosystems, and result in drastic upheavals in their composition, distribution and productivity. These effects, induced by climate change, will aggravate the existing stresses that derive from non-climate factors. In turn, this will have fundamental impacts on the viability of the livelihoods of millions of forest-dependent people in Africa.

<- Back to: Occasional Papers