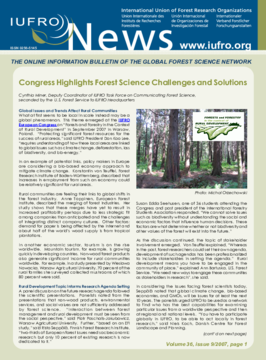 The IUFRO European Congress in Poland and the Division 6 Symposium in Finland with the kick-off meeting of the Task Force on Forests and Human Health are at the centre of this issue.


IUFRO News Vol. 36, issue 9, 2007 published in September reports on the highlights of the IUFRO European Congress on "Forests and Forestry in the Context of Rural Development" held in Warsaw, Poland, as well as on the IUFRO Division 6 Symposium entitled "Integrative Science for Integrative Management" in Saariselkä, Finland.  Furthermore, the goals and planned activities of the new IUFRO Task Force on Forests and Human Health are outlined.  In addition to a selection of upcoming IUFRO meetings, there are also short reports from the VI Latin American Congress on Forest and Environmental Law in Ecuador and from the Conference on Measuring and Modeling Complex Stands in Canada.