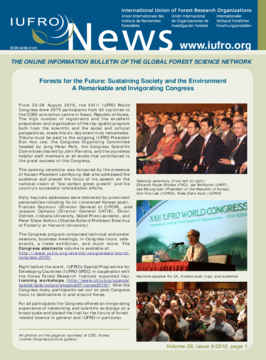 Find information related to the XXIII IUFRO World Congress, including the Seoul Resolution, Honours and Awards and International Council Decisions and read an interview with the new IUFRO President.


This issue focuses on the XXIII IUFRO World Congress in Seoul, Korea, and presents highlights and important decisions such as the election of the new President, Vice-Presidents and Board members of IUFRO and the venue for the next Congress. In the Congress Resolution IUFRO commits itself to focusing more on scientific research and international collaboration in six thematic areas: Forests for People; Climate Change and Forestry; Bio-Energy; Forest Biodiversity Conservation; Forests and Water Interactions; and Forest Resources for the Future. In addition to information about new publications, upcoming meetings and other news items, this newsletter also includes an interview with the new IUFRO President Niels Elers Koch and an article on former IUFRO Executive Director Peter Mayer.