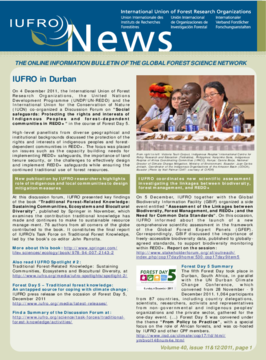 Read about IUFRO's activities at the UN Durban Climate Change Conference and at the Asia Pacific Forestry Week in Beijing, and learn about IUFRO meetings, new publications and upcoming events.


In the course of the UN Durban Climate Change Conference, IUFRO, UNDP/UN-REDD and IUCN successfully co-organized a Discussion Forum on "Social safeguards: Protecting the rights and interests of Indigenous Peoples and forest-dependent communities in REDD+" on Forest Day 5. One day later, IUFRO together with GBIF, held a side event entitled "Assessment of the Linkages between Biodiversity, Forest Management, and REDD+; and the Need for Common Data Standards". At the Asia Pacific Forestry Week, IUFRO was also well represented with a series of activities such as workshops and an information booth. Several interesting meeting reports as well as general announcements, information on new IUFRO publications and upcoming meetings round off this combined issue.