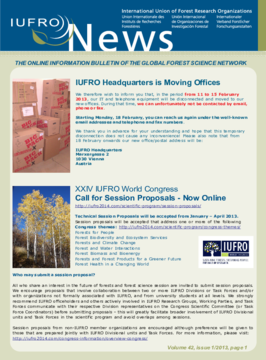 Find information on the online call for session proposals for the next IUFRO World Congress, reports from IUFRO meetings as well as interesting publications, upcoming meetings and much more…


This issue of IUFRO News is the last one to be produced in our Headquarters in Mariabrunn on the western outskirts of Vienna. IUFRO HQ will start regular work in its new offices located not far from the city centre of Vienna on 18 February 2013. In addition to reports from meetings involving IUFRO Units such as the BIOCOMP 2012, for example, this first newsletter in 2013 contains interesting announcements of new publications, scholarship opportunities, and upcoming meetings, and reminds you of the online call for session proposals and the call for nominations for awards for the IUFRO World Congress in 2014.