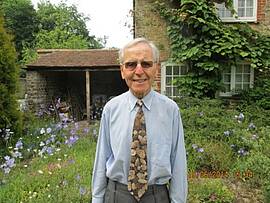 It is with great sadness that we inform you of the passing of IUFRO past-President Professor Jeff Burley. He will be dearly missed by the IUFRO community, and our heartfelt sympathy goes out to his wife and family.


Jeff obtained his BA and then Masters in Forestry from the University of Oxford, UK. He completed his PhD at Yale, USA, where his thesis was on the genetic variation of Sitka spruce. He then lived and worked for several years in Zambia, Malawi and Zimbabwe (then Rhodesia) before returning to Oxford. In 1976, he was appointed as University Lecturer in Forestry in the University’s Department of Forestry and became the last Head of Department and first Director of the Oxford Forestry Institute (OFI) in 1982.

Throughout his professional career, Professor Jeff Burley was active in IUFRO. At the 15th IUFRO Congress in Gainesville, USA (1971) he was instrumental in the establishment of the first specifically tropical Working Group in the Union. At the Congress in Ljubljana, Yugoslavia (1986), he was elected Coordinator of Division 2 Forest Plants and Forest Protection and became a member of the Executive Board for 1987-1990. In 1995, at the 20th IUFRO World Congress in Tampere, Finland, Professor Burley was elected President for 1996-2000. In 2005, at the 22nd IUFRO World Congress in Brisbane, Australia, Professor Jeffery Burley retired formally and was awarded IUFRO Honorary Membership.

We are inspired by his remarkable life and deeply grateful for his outstanding contributions to IUFRO and forest science globally.

An obituary will be published in the next issue of IUFRO News at the end of January 2022.