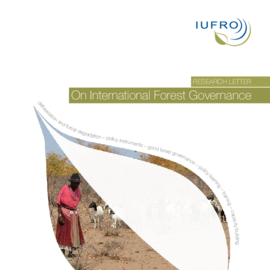 Efforts to address global deforestation and forest degradation first gained international prominence in the 1980s, which led to an array of global initiatives including the signature of the International Tropical Timber Agreement and the establishment of the International Tropical Timber Organization. This was soon followed by a concerted, but ultimately failed effort, to achieve a binding Global Forest Convention during the 1992 Rio Earth Summit. Recognition that both these early international efforts and domestic regulations were insufficient to address the drivers of forest loss, led to the introduction over time of a variety of international and regional institutions and mechanisms including National Forest Programmes, Criteria and Indicator Processes, and forest certification/eco-labelling of forest products

A publication of the IUFRO Task Force on International Forest Governance

<- Back to: IUFRO Research Letters