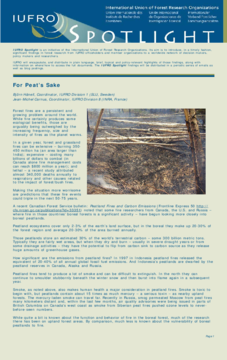 This issue highlights recent studies that examine the significance of carbon emissions from boreal peatland fires and the relationship between peat moisture and the potential for burning.


Peatland ecosystems cover only 2-3% of the earth's land surface, but in the boreal they make up 20-30% of the forest region and average 20-30% of the area burned annually. Those peatlands store an estimated 30% of the world's terrestrial carbon – some 300 billion metric tons. Typically they are fairly wet areas, but when they dry and burn – usually in severe drought years or from some drainage activities – they have the potential to flip from carbon sink to carbon source as they release huge amounts of greenhouse gases. A recent Canadian Forest Service bulletin: Peatland Fires and Carbon Emissions (Frontline Express 50) noted that some fire researchers from Canada, the U.S. and Russia – where fire in those countries' boreal forests is a significant activity – have begun looking more closely into boreal peatlands. This Spotlight issue presents two of the most recent studies in this context: "Examining the utility of the Canadian Forest Fire Weather Index System in boreal peatlands" (J.M Waddington et al) and "Experimental drying intensifies burning and carbon losses in a northern peatland" (M.R. Turetsky et al).