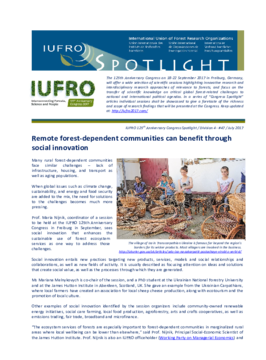 The second IUFRO Anniversary Congress Spotlight draws attention to social innovation and its role in attaining a more sustainable use of ecosystem services.


"The ecosystem services of forests are especially important to forest-dependent communities in marginalized rural areas where local wellbeing can be lower than elsewhere," says Prof. Maria Nijnik, Principal Social-Economic Scientist of the James Hutton Institute in Aberdeen Scotland, who organizes the session together with Ms Mariana Melnykovych, a PhD student at the Ukrainian National Forestry University.

Attention to social innovation and its role in attaining a more sustainable use of ecosystem services has been rising. Social innovations can include the creation of new institutions, networks and governance arrangements and, while these practices may be closely associated with rural policy reforms, they necessarily rely on the voluntary engagement of civil society.