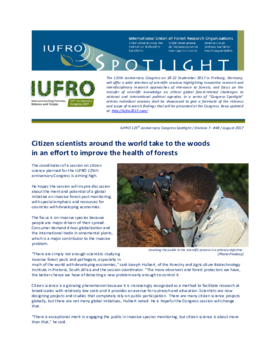 Read this latest Spotlight about an Anniversary Congress session on "Early detection and monitoring of invasive forest pests and pathogens with citizen science"!


"There are simply not enough scientists studying invasive forest pests and pathogens, especially in much of the world with developing economies," says Joseph Hulbert, of the Forestry and Agriculture Biotechnology Institute in Pretoria, South Africa and coordinator of a session at the upcoming IUFRO Anniversary Congress. "The more observers and forest protectors we have, the better chance we have of detecting a new problem early enough to control it."

Many of the presentations in this session will speak of the different audiences they engage and will explain how citizens – adults and children – are provided with basic training enabling them to be effective observers, how they are equipped with the knowledge to collect data, report issues or take action.