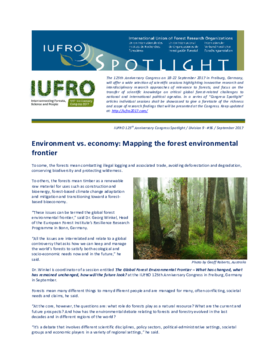 This Congress session addresses the global controversy that asks how we can keep and manage the world's forests to satisfy both ecological and socio-economic needs.


Forests mean many different things to many different people and are managed for many, often conflicting, societal needs and claims. For some, forests mean conserving biodiversity and protecting wilderness, for others forests mean timber as a renewable raw material, for example. These issues can be termed the global forest environmental frontier.

Dr. Georg Winkel, Head of the European Forest Institute's Resilience Research Programme in Bonn, Germany, is coordinator of a session entitled The Global Forest Environmental Frontier – What has changed, what has remained unchanged, how will the future look? at the IUFRO 125th Anniversary Congress in Freiburg.

Delineating the frontier has become more complex since the 1980s, and the related debate today is much more multi-faceted. Elaborating on the evolution of the frontier, its shifting boundaries and finding common denominators for the changes, will be at the heart of his Congress session.